Heroku is scrapping free plans – how does it affect you?

Published by Stefan from AutoIdle on November 10, 2022 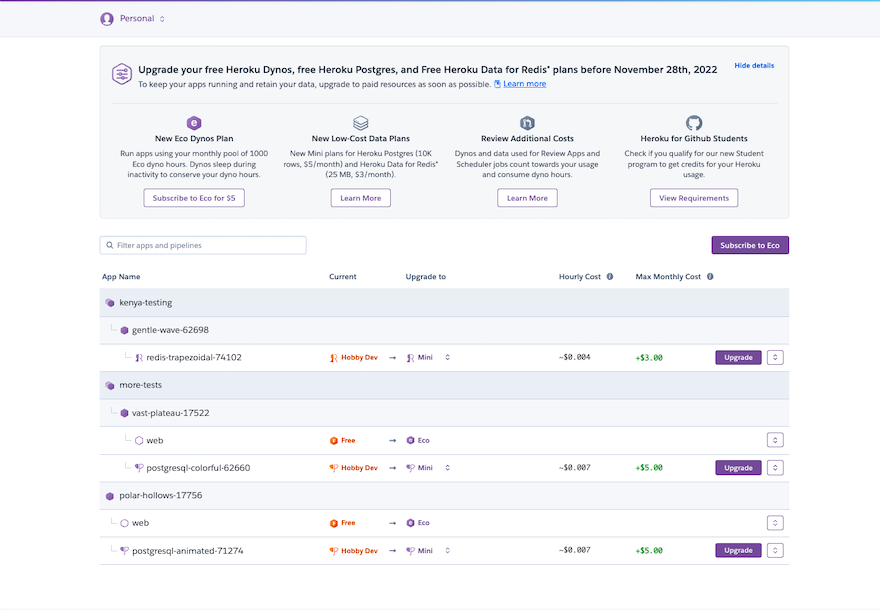 Heroku is officially ending its free plan on November 28, 2022. Numerous hobbyists, startups, and developers have benefited from the generous subscriptions that allow them to build and test apps on the cloud. But such privilege will be replaced by paid subscriptions, which remove free access to Heroku’s powerful Dynos and data services.  Find out how Heroku’s abolishment of its free pricing tier affects you and what you can do about it.

How does this affect companies?

Heroku is the favored PaaS for building, developing, and scaling apps among startups. It is pivotal for Lazy Jar, MoveWell, Toybox, Krit, and other growing startups that seek reliability, availability, and cost for their cloud workloads. Some startups use Heroku as a staging platform to test their apps, while others host lightweight apps within its free plan’s limited capacity.

Heroku’s announcement will put an end to such practices. The cloud provider cited abuse as the decisive factor for this change but did not offer more detail. Unfortunately, the move also affected genuine users. If you’ve been deploying apps or storing data with Heroku’s free plans, you must upgrade to a paid equivalent of the existing plans when the new policy takes effect.

Developers can no longer count on Heroku to offer a zero-cost staging platform. Neither can companies leverage Heroku’s easy-to-use features without monthly financial commitment. The question now lies in whether to pay for resources they have previously enjoyed for free or seek other options.

What do Heroku's paid subscriptions offer?

At the moment of writing, Heroku offers free plans for its Dynos, Heroku Postgres, and Heroku Data for Redis. With the abolishment, customers will pay the following fees for their existing free subscriptions.

In its move, Heroku removes the term Hobby from existing low-priced subscription plans. Meanwhile, It introduced Eco Dynos, Mini Postgress, and Mini Heroku Data for Redis to replace scrapped free options. Shortly after announcing the removal of free tiers, Heroku partnered with GitHub to unveil its Student Development Packs, which come with 12 months of $13 credits.

Is it worth continuing with Heroku's paid plan?

Heroku’s abolishment of its free plans will impact hobbyists, startups, and individual developers more than large enterprises. If you’re running a bootstrapped operation with a tight budget, the additional fee to continue using Heroku might be a burden.

Naturally, some Heroku users weigh their options. With growing competitors in the PaaS space, and many offering free starter plans, it seems natural to switch to another platform.

Still, not all users share the same optimism about migrating their cloud workloads to newer competitors. Heroku has spent years refining its features and is arguably the best PaaS provider. It makes deploying apps on the cloud so simple by abstracting the technicalities of setting up servers and integrating them with other services.

At this point, it might be prudent to stay with Heroku and find ways to save operational costs.

How to reduce Heroku's recurring fees

Heroku bills users on Dyno’s active duration. You’ll be charged if the dyno remains active, even if your app is idling. Amidst growing cost concerns, Heroku introduced the Eco Dynos plan. In this plan, the Dyno automatically sleeps after 30 minutes of inactivity. This allows users to reduce monthly costs when testing their apps.

However, Heroku does not allow sleep mode on other premium plans, This means the Dynos continue to run even when your apps are idling and pushes the monthly bill to the limit.

In such cases, you’ll want to use AutoIdle to reduce Heroku’s billable hours. AutoIdle puts the web, worker, and scheduler Dynos to sleep after 30 minutes of inactivity. It also applies to apps that use more than 1 Dyno. AutoIdle works across all of Heroku’s premium plans to provide massive savings when running test, review, or non-critical apps.

Thank you for reading our blog!

We have built a Heroku add-on that helps you save money by automatically putting your staging and review apps to sleep.